Hello and welcome to my blog where I will chronicle my experience learning to play the shamisen (sangen).


The shamisen is a three-string, fretless instrument originating in China, migrating to Okinawa, and eventually into Japan, changing form and names along the way. I will not bore you with the history and changes of this instrument through the different cultures and time. There is plenty of web based information regarding that on the internet. Instead, I will focus on the practical aspects of taking up this instrument and learning to play. 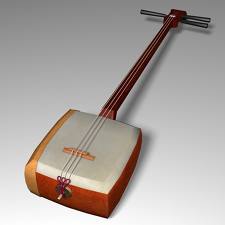 Why? Well, when I looked into adopting this instrument I thought, “Hey, I can teach myself using books, references, online resources, sheet music, etc.” Uh, not hardly. What I found was a dearth of information on learning to play the shamisen. I should have bagged it at that point, but I persisted hoping against hope for a miracle. I got one. More on that in a later post.


As I mentioned earlier, there are tons of online resources outlining the genres, history, nomenclatures, etc. for the various types of shamisen and their varied musical styles. But resources to actually learn how to play, not so much--with the exception of perhaps the tsugaru style of shamisen.


Tsugaru is the most popular genre of the shamisen for the current generation. Because of that, there are some excellent online sites devoting themselves to this style, the major one being Bachido.com. That site actually provides a forum, initial music lessons, a place to buy necessary shamisen supplies, and much more.


Although much of what is on the Bachido site is transferable to the many other forms of playing shamisen, it cannot, by its very nature, provide specific resources outside the tsugaru style. That limitation is a severe one if you want to learn how to play some other form of shamisen, like Jiuta.


Before I get into the whys and whatfors of the Jiuta style, why the shamisen? What got me interested? I have no musical background of any kind. I cannot read music nor can I play any musical instrument—not even a kazoo! So why the shamisen?


I love Korean television dramas. Have watched them for years. I can't speak Korean or any other foreign language for that matter, so you get real good at reading subtitles!


I was watching Heartstrings, a recent (2011) Korean Lo-quad drama (lo-quad is a love quadrangle as compared to a love triangle. Many Korean dramas use this format for their TV series). One of the main characters of Heartstrings plays a traditional Korean stringed instrument called the Gayageum, similar to the Japanese Koto.

The playing of this instrument and other traditional Korean instruments in the TV series reminded me of my favorite Japanese music—music that is emotional and usually slightly melancholic. I remembered that of the Japanese instruments I enjoyed listening to was a three-stringed instrument of some kind. Couldn't remember the name so looked it up on the web. Yep, the shamisen or sangen in Japanese.


I listened to several samples of the style of playing and found that the only genre of the sangen I enjoyed was that of Jiuta or very similar forms. These are short songs, often played by geisha, that evoke emotion. Jiuta is usually slower than the other genres, more paced, and in many songs, sad. I said, “Hey, wouldn't it be cool if I could learn to play the sangen in the Jiuta style.”


In my youth, I had a passing interest in saxophone and electric guitar, but life got in the way and the years rolled on. I am now 63 and will retire in three more years. I told myself if I am going to learn to play a musical instrument, it is now or it will be never. Since I only had interest in the sangen and the Jiuta style of playing, I thought this was a logical instrument to take up.


For me, another advantage of the sangen compared to other western musical instruments is the music notation itself. I was concerned regarding the learning curve of standard western musical notation I would have to master if I took up say a guitar, flute, etc. Sure, it could be done—but I had a clean slate. Why not learn the notation of the sangen—tablature--since that was the only instrument I was interested in and all the music written for it (well, most all) is in this form of notation?


Again, you can read of the history of tablature in Wikipedia. Lots of resources out there. Let's just say it is considered by most a more simple form of musical notation. Simpler than modern western musical notation? Not sure—I'm no expert—but my singular advantage in eschewing western notation for Japanese tablature was that I had no musical notation learning to unlearn. As I said earlier, I was starting with a clean slate.